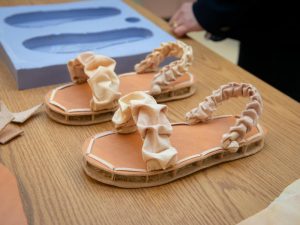 As sustainable fashion goes mainstream, multiple designers are turning to fungi for compostable attire. Over the past three years, the fashion industry has started paying attention to biodegradable and renewable fabrics. Last year, Salvatore Ferragamo used a citrus byproduct material that feels like silk for a collection of shirts, dresses and pants; Philippines-based AnanasAnam created a faux-leather out of pineapple leaves dubbed Piñatex; and Dutch textile designer Aniela Hoitink created a mycelium dress that was as stylish as any satin cocktail dress. 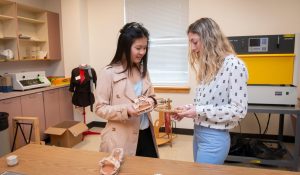 Yes, mycelium—the interlocking root system that spawns forests of mushrooms in your yard after it rains. And this fungi fashion seems to be a trend: Microsoft’s Artist-in-Residence Erin Smith grew her own wedding dress out of tree mulch and mycelium; lighting designer Danielle Trofe uses mycelium to create biodegradable light fixtures; and Life Materials sells sheets of its mycelium leather for anyone interested in a do-it-yourself creation.

Over the past three years, the fashion industry has started paying attention to biodegradable and renewable fabrics. Last year, Salvatore Ferragamo used a citrus byproduct material that feels like silk for a collection of shirts, dresses and pants; Philippines-based AnanasAnam created a faux-leather out of pineapple leaves dubbed Piñatex; and Dutch textile designer Aniela Hoitink created a mycelium dress that was as stylish as any satin cocktail dress.

Jillian Silverman, a University of Delaware fashion and apparel graduate student focused on environmental sustainability, recently crafted a prototype shoe that combines mushrooms, agriculture waste and fabric scraps. “A lot of fashion fabrics are not compostable or it takes a really long time for them to break down,” says Silverman. In her shoe, “everything is natural, everything is biodegradable, nontoxic. It’s a perfect solution to reducing the impacts of textile waste, reducing toxic inputs and using all renewable inputs.”

Because mushroom mycelium has previously been used to create compostable packaging and building materials, Silverman thought there was a good chance it could be grown into fashion products to replace other unsustainable materials in the fashion industry. Her university is also conveniently close to Kennett Square, Pennsylvania, is “the mushroom capital of the world,” says Silverman. “So this offers opportunities for local sourcing and the expertise of the nearby mushroom farms and growers.”

Mycelium naturally binds together materials—in the shoe’s case, chicken feathers and other textile—as it grows. After testing, Silverman decided to use reishi, oyster, king oyster, and yellow oyster varieties for their superior aesthetic and strength. She then designed a shoe sole mold in which to grow the mycelium into the specific shape needed. Mycelium can grow to fill any mold in about a week. Once it filled the mold, Silverman baked it to “halt the growth and prevent mushrooms from fruiting on the surface.”

Huantian Cao, Silverman’s graduate advisor, says the challenge was creating the perfect growth mixture for the mycelium to thrive. To do this, Silverman tested several fabrics and decided upon an insulation material comprised of recycled cotton and jute, a rough fiber similar to twine or rope. This material, which would otherwise be destined for a landfill, created a strong material as it intertwined and bonded with the fibers during its growth stage.

Other components in the final mycelium substrate included psyllium husk (a natural plant fiber), cornstarch (which acted as food sources for the mycelium) and chicken feathers (which added strength to the final product).

“Both the textile material and feathers are soft, but strong,” says Cao, a professor of fashion and apparel studies and co-director of the University of Delaware’s Sustainable Apparel Initiative. “Including these materials in mycelium composite makes the composite comfortable to wear and also strong to step on.”

According to Silverman, the end result is a compostable, biodegradable mushroom-based sole that could replace rubber and other manmade components. But if it’s a compostable material, what happens if you wear the shoe in the rain?

John Taylor, professor of plant and microbial biology at the University of California at Berkeley, believes that unless the shoe sole is treated to prevent water intrusion, it’s far from ready to wear.

“There is likely a trade-off in durability versus compostability,” says Taylor, who isn’t involved in Silverman’s project. “Mycelium would absorb water if untreated, leading to degradation of shoe soles but promoting compostability. If the mycelium is treated to prevent absorption of water, the shoe sole function would be improved, but the compostability would decline.”

Silverman says that compostable products cannot compost without the correct conditions and organisms, so the soles shouldn’t just biodegrade during use. “Mycelium is naturally water-resistant so we believe if we let it grow to fully cover the substrate materials that the shoes would be able to tolerate at least some moisture,” says Silverman, though she does admit that “we do have some concerns about the flexibility of the material.”
While Silverman’s product may need some fine-tuning before it is market-ready, a California-based materials innovation startup called Bolt Threads is already accepting pre-orders for its mushroom “leather” bag in June. The company is known for creating its Microsilk fabric by copying spider silk gene technology. Through a new partnership with Ecovative Design, a company that created mycelium-based packaging and industrial-based materials, Bolt Threads Co-Founder Dan Widmaier is excited about the possibilities of renewable, sustainable fabrics, especially one that has the ability to replace leather and possibly lessen leather’s carbon footprint.

“If you think about leather, you’ve got a product there that is from the waste stream of the meat industry,” says Widmaier. “Then you look at a future with 7 billion inhabitants on Planet Earth, growing to 10 billion … there’s just not enough skins and hides to make leather.” That’s what makes mycelium a sustainable solution, says Widmaier, who points out the contrast between producing mycelium and raising an animal for meat/leather.

“Mycelium is growing on a celluloise feedstock – in our case, corn stover (the leaves, stalks and cobs leftover in a field after a harvest),” he says. “That’s a pretty low impact compared to raising a whole animal for three years when you look at the sustainability profile of water use, land use, carbon cycle, nitrogen cycle.”

Stella McCartney, a designer known for her commitment to sustainable fashion, recently used Bolt Thread’s mycelium “leather” (branded as Mylo) for a handbag trimmed in metal chain at the Victoria and Albert Museum’s Fashioned from Nature exhibit, which opened April 21.

While Widmaier’s company is a few steps ahead of Silverman, both are in agreement that mushrooms have a place in fashion. And both see a future where material innovation evolves and grows as more consumers realize that fashion can be on-trend both stylishly and sustainably—a future where fungi fabric is as common as silk or cotton. “Biowaste materials in general are gaining a lot of attention and a lot of traction in the sustainable fashion industry as well as other industries,” says Silverman.

Let’s hope so, because our current levels of consumer waste are frankly unsustainable. Every year, the average person throws away roughly 70lbs of clothing and other wearable waste like backpacks, broken watches and hats, according to the Council for Textile Recycling. The EPA estimates that textile waste make up 5 percent of all landfill space, with those dirty leather and rubber soles coexisting for upwards of 50 years surrounded by other consumer waste.

Lowering our waste levels will require all sectors of society to catch up. “For an industry where we make something like 80 billion units of apparel every year, we need new ways to make materials that are more long-term compatible with the planet and the environment,” says Widmaier.